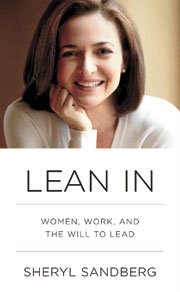 The new book, “Lean In,” is partly anecdotal and partly a rallying cry, intended to encourage women to break free from their innate hesitation to aggressively advance their careers and “step up to the table.”
It is a primer with a “can-do” attitude for women whose fears stop them from achieving their professional goals. Interestingly, author Sheryl Sandberg is not just setting her sights on the issue of equal pay for equal work, but instead trying to prompt women to aspire to leadership roles, lamenting, “I watched as the promise my generation had for female leadership dwindled.”

In her book, published in March, Sandberg — chief operating officer of Facebook, and ranked on Fortune’s list of the 50 Most Powerful Women in Business and one of Time’s 100 Most Influential People in the World — reminds us how, even in the year 2013, marketers display preconceived gender perceptions, selling shirts for boys who are “Smart like Daddy” and girls who are “Pretty like Mommy,” reiterating throughout the book, her frustration with men in the workplace who condescendingly pat her on the head and comment, however favorably, on her looks.

She points out that men are promoted on their potential and women are evaluated on their accomplishments.

Sandberg draws upon moments of insecurity in her past, which she believes are typical for women, among them, “imposter syndrome,” causing her to worry that her peers will discover that she is not really good enough. She references studies that indicate that women are slower to take risks than men, urging women to learn how to be more confident and stop second-guessing themselves.

Sandberg also recognizes how difficult it can be for women to negotiate hard, and deviate from their natural tendency to be loyal, nice, and nurturing, without being labeled as too aggressive, writing, “It’s like trying to cross a minefield backward in high heels.” She tells us, too, that women who are hesitating are often failing to recognize the power they could actually wield.

When she talks about how women see themselves in the workplace, she recalls how hard women worked to fit in and be like men. She reminds me how I felt the need to always wear a suit, instead of a dress to work, as a young attorney in the 1980s, for fear that I would be taken less seriously in court.

Central to her concerns is the fact that many women make career decisions with child-rearing or potential child-rearing as a factor, whereas men pursue their careers free from such a hindrance. Sandberg wants women to make career decisions more like men, by not, “leaving before [they] leave.” She does not want women to shy away from opportunities that present themselves because they might be pregnant or thinking of becoming pregnant, but instead “lean in” and forge ahead with every opportunity.

I, personally, did not “lean in,” and I remember the feelings of ambivalence and uncertainty I felt, that plague so many other expectant mothers, with their career decisions. Sandberg is so fully committed to her career, supported by a husband with a flexible job. But, not all women are. She exhibited ambivalence at times, but calls upon us to forge ahead fearlessly.

For years, women have bemoaned their conflicted lives and shared the emotions of their absenteeism at home, but she does not whine.

She advocates for women to openly discuss with office management ways to ease the home-work balance, having channeled her passion into practical solutions when faced with gender inequity, emblematic of her personality and superior business acumen.

Although I do not want to perpetuate the stereotype of the emotional female, I also recognize that we are not all hard-wired like Sandberg, nor do we always feel we can or want to negotiate hard with our spouses and employers for the proper balance.

We are not all Sheryl Sandberg. Nevertheless, this book should motivate all of us to take another look in the mirror and see the sparks of potential sometimes hidden from view.

Sandberg favors “authentic communication,” finding that employees who are honest about the home-work conflicts they face may learn that supervisors are willing to accommodate them and others like them, if they speak up. She even hopes that workers who shed tears in the workplace to communicate their needs are no longer seen as weak, but as authentic communicators.

She explains that co-workers who share emotions build stronger relationships, which, in turn, motivate people to work harder.

She tells women seeking to further their careers to find a mentor, because mentorship and sponsorship are critical for progression in the workplace. She further explains that mentorships develop from real and earned connections between people, and that mentors will select protegees who evidence the potential to benefit from their guidance.

She realizes that we are not all superwomen and that women sometimes get caught up trying to do everything perfectly, which is a losing proposition. As a result, she tells us she learned to be a perfectionist only for what really matters, noting “done is better than perfect.”

According to Sandberg, our culture depicts women adept at balancing their home and work lives as one in a million, as depicted in the film “I Don’t Know How She Does It,” thereby instilling fear in young women who may then look upon the challenge as insurmountable. She also references the close scrutiny of Yahoo Chief Executive Officer Melissa Mayer’s maternity leave, commenting, “the dearth of female leaders causes one woman to be viewed as representative of her entire gender.”

Sandberg’s thoughts resonate with me as she describes how women of her generation thought they had achieved equality, but, along with their spouses, fell right into stereotypical roles, “caught by surprise,” as they worked full-time during the day and came home to find themselves managing the majority of child-rearing and household tasks. She insists that women stop feeling that they alone should be putting home concerns before work, or the stereotype will continue to be a self-fulfilling prophecy.

“The sooner we break the cycle, the faster we will reach greater equality,” she writes.

She counsels young women to stop trying to “play the good girl” in relationships by acting traditionally domestic to please a man, but instead to date and marry someone who actually wants to be an equal partner and truly share domestic responsibilities: a husband who would “lean in” at home.

The good news is that, some women in their 20s and early 30s have been reporting that they are not as impeded in their choices and they have more of an expectation for at-home equality from their spouses.

Should we ‘lean in?’

Sandberg’s crusade doesn’t end with the book. She has created a “Lean In” website to help encourage women to meet and discuss her ideas and their goals in small groups, known as “Lean In Circles.”

Anne-Marie Slaughter, who revealed last summer how she walked away from the upper echelons of power in the federal government to be home for her teens, criticizes Sandberg for putting the onus for change on the shoulders of young women, instead of focusing more on the change needed within the home and workplace.

I disagree, as I see lessons for all of us in this book: for stay-at-home moms, for moms who work full-time or part-time, and for dads. Although Sandberg did mention the “external barriers” facing women, she chose instead to write about the internal barriers, which have not been the focal point for discussion thus far.

Her message should be taken seriously and can serve to make us all better, individually and as a whole.

“Lean In” is a well-tailored guidebook, which is inspiring women across the country, re-opening a formerly tabled discussion, and preparing all of us to better face the challenges ahead.

Risa C. Doherty is an award-winning writer and member of the American Society of Journalists and Authors. Read more at www.risadoherty.com and www.leanin.com.

← When to Get Your Teen a Car Bay Area Parent Teen Focus
College Applications. No Need for Panic Your Teen →